Launching an Etsy shop has been years in the making. Many. Many. Years. I have to tell you, I did not expect this feeling once it happened. I mean, I knew there would be some sense of accomplishment. Pride even. I did not anticipate feeling emotional. I’ll start at the beginning.

I have wanted to shift my focus toward personally driven creative projects and launch an Etsy shop, or any online selling platform, for as long as I can remember. To make things and have them end up in the hands of people all over the world some day. I decided it was really time to make this happen. To just suck it up and put in the extra hours (even though I was convinced there were, in fact, no extra hours to put in) and get this thing launched…even if only on a very small scale at first. My original plan was to launch it March of 2018. I found myself dealing with an illness for quite a while and my focus became fixing some of that and on my health in general. March came and went. I felt I’d let myself down again.

A few weeks ago, the push for a yearly holiday bazaar I participate in was in full swing. My entire house was in full-scale production mode. There wasn’t a single surface left available to even eat a meal on. It was busier than Santa’s workshop and not a single elf was around to help me. I decided in that frenzied couple weeks, that I would make this also serve as an opportunity to get things made, photographed, and packaged for my Etsy shop. Whatever was left after the sale would go on Etsy and that would rip the bandaid of the unknown right off.

Here is the valuable takeaway. The mental barriers we create that prevent us from doing something are often no more real than monsters under our bed. It was nothing even remotely close to the complicated time suck I had it in my head to be. Etsy, as I finally convincingly told myself, has it all figured out. They make it fairly easy for people to get started. Deep down I knew this. I knew that millions of people using the platform meant it had to be pretty much dummy proof. It wasn’t taking the perfect photographs or writing accurate descriptions or any of those things that worried me. It was the daunting task of figuring out what to charge for postage when I had no idea what all the variables of each order would be. Low and behold, Etsy figures it all out for you. I plug in the dimensions of the package I plan to mail that item in, toss in the weight it would be, and they do all of the heavy lifting. You don’t really realize that, though, until you start setting up an item.

Last night I had to officially open the shop to finish branding it and write all of my shop descriptions and things. I told a total of two people in a text we were all in at the time. My friend jumped right on there, without even so much as asking what its name was or for a link, and made a purchase. The overwhelming sense of accomplishment and pride had me giddy. I quickly made her items and lovingly packaged them up. I rode that high well into the wee hours. Today I went to the post office before anything else and I shipped her package. I told the postal worker that it was my first Etsy shop order and she did me a solid and got at least a little excited with me. When I got home, with my celebratory coffee, I got a little emotional. I did it. This thing I thought was just never going to happen, but I kept working towards anyway. This thing that I had all the excuses in the world not to follow through on, but did anyway.

I’m a teacher at Fodder School and I’d love for you to join me! 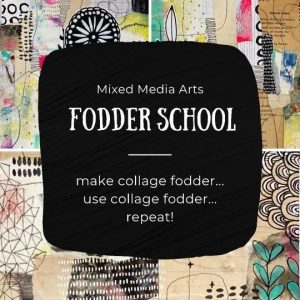 Be the first to learn about exciting things happening in the studio.